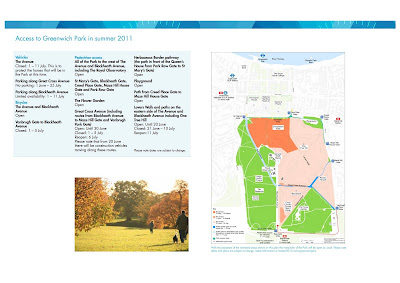 The London 2012 Organising Committee (LOCOG) has published a brochure setting out their proposals for closing parts of Greenwich Park for the Equestrian and Modern Pentathlon events in 2011. The closure of some paths across the park is scheduled to begin on Monday 16th May.

Unfortunately, the map is incompatible both with what is stated in the timetable and with what was approved at the Planning Board on 14th April. The map shows that the footpath from the Park Row entrance – used by people visiting the Observatory from Maze Hill Station, the River Walk and the Old Naval College – and the footpath below the Wolfe Statue – providing a shorter and less steep route between the Maze Hill and St Mary’s gates and used to reach Greenwich stations and Town Centre from Westcombe Park – will be closed from Monday 16th May. But the approved plans showed these paths as open, as also stated in the Timetable. The map also shows the Tea Pavilion as closed from 1st June whereas the approved plan showed it as open throughout.

Following representations by the Westcombe and other amenity Societies, LOCOG officials are urgently reviewing these apparent breaches of the Planning conditions. The closures will in any case take time to implement and despite LOCOG failed to provide advance warning signs or accurate information, it should still be possible to use the paths while the problem is addressed.