Deadline for decision: 4 May 2012  RAISE NO OBJECTION

In Response to an invitation by the Commons TransportSelect Committee, the followin written evidence on the transport plans for the 2012 Olympic, has been submitted by the Westcombe Society   and accepted by theTransport Select Committee.

Disabled access at Maze Hill Station as an Olympic Legacy

In Response to an invitation by the Commons Transport Select Committee the following written evidence on the transport plan for the 2012 Olympic and Paralympic Games, and in particular the Delivery of a transport legacy following the Games, has been submitted with the support of the Westcombe Society and accepted by the Commons Select Transport Committee. 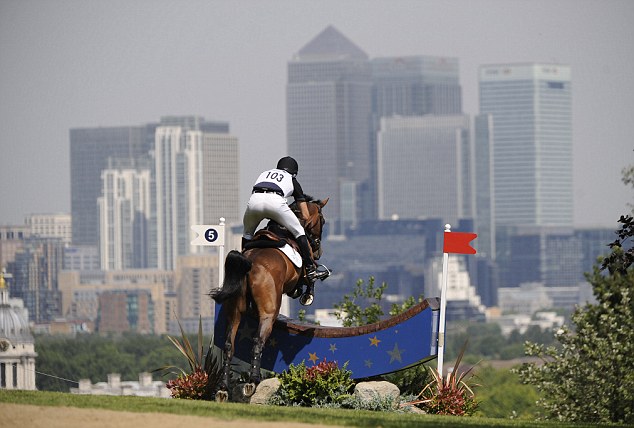 1.1.  The Royal Borough of Greenwich is committed to ensuring convenient and safe access for disabled spectators to the Olympic Equestrian Events, including access from Maze Hill Station.
1.2.  Network  Rail, Southeastern Trains and the Olympic Delivery Authority have undertaken to provide the necessary infrastructure at Maze Hill Station to achieve this, but the current plans make no such provision, and disabled visitors using Platform 2 at Maze Hill Station must negotiate a 51-step footbridge, which is clearly impracticable.
1.3.  A gently sloping ramp from the roadway to platform 2 and, optimally, a pedestrian walkway alongside the Maze Hill bridge (comparable to the existing walkway at the equally narrow road bridge in Vanbrugh Hill), is the infrastructure required to provide the necessary access. The walkway over the track would avoid the narrow pavement on Maze Hill bridge and enable pedestrians and wheelchair users to reach the Olympic venue safely.
1.4.  There is still time to make the changes, at modest cost (none of the other proposed infrastructure such as stepped footbridges over Romney Road and the A2, or inclined ramps over the Ha-Ha by the Queens House has yet been started). The ramp and walkway would be a permanent legacy for visitors to the internationally important Maritime Greenwich World Heritage Site which is currently inaccessible to disabled visitors arriving from London at the designated rail station.
1.5.  After a structural failure threatening the 2010 Commonwealth Games in Delhi, the Indian Army constructed similar infrastructure in four days flat at far lower cost than the original.  No cost of removal the proposed  infrastructure (unlike the other elements) would be incurred if it were left as a permanent legacy for visitors to what is a key world, national and local tourist destination currently inaccessible to disabled visitors from the designated Maze Hill rail station less than 200 yards away.

2.1.  Maritime Greenwich World Heritage Site is a major visitor attraction.  It contains glorious architecture such as Inigo Jones’ The Queens House; the Painted Hall and Chapel of the Old Royal Naval College; the Cutty Sark, Ranger’s House; and Vanbrugh Castle, as well as the church of St Alphege, the millennium of whose martyrdom in 1012 is being commemorated this year.  It contains  world class museums in the Royal Museums, as well as world class collections in the Fan Museum and the Wernher Collection in Ranger’s House.  It houses the Meridian Line from which there are spectacular views of London and its river.

2.2.  The principal rail station for the World Heritage Site is Maze Hill Station, less than 200 yards from Greenwich Park.  There are trains every ten minutes from London Bridge station which whisk visitors to the site in an average time of 13 minutes.  Maze Hill Station provides step-free access from Platform 1 to reach to the World Heritage Site and Olympic venue.  But disabled visitors using Platform 2 must negotiate  a 51-step footbridge which is clearly impracticable.

3.    The Olympic Equestrian Events
3.1.  Because of its iconic status and its inherent beauty, as well as its proximity to the Olympic Village, Greenwich Park was designated the venue of choice for the 2012 Olympic Equestrian Events.  As part of the Planning Process, the Royal Borough of Greenwich committed itself “to ensuring convenient and safe access for disabled spectators.... as part of a planning condition “[1].  That commitment expressly included “clearly defined spectator walking routes (including for those who are less able) will be established well in advance” including from Maze Hill Station[2].
3.2.  The commitment was based on assurances the Royal Borough had received from Network Rail, Southeastern Trains and the ODA, as stated in the 2010 report, viz:-
Network Rail and South Eastern Trains, who operate Blackheath and Maze Hill stations, have plans to improve these stations. As an interested party/stakeholder London 2012 will be working with these bodies to explore opportunities to deliver the needed improvements. It is important to note that the Council are confident that effective transport operations for the Events at Greenwich can be delivered by the existing and additional rail infrastructure (being provided by the ODA)[3]
4.    Maze Hill Station
4.1.  Maze Hill station is located on a section of track between two narrow road bridges in Maze Hill and Vanbrugh Hill.  Because the pavements over the bridge are so narrow, a parallel segregated walkway has been in place in Vanbrugh Hill for many years for the safety of pedestrians. 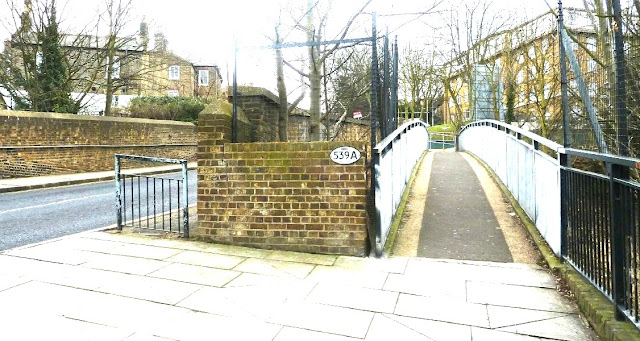 5.    Proposed Additional Infrastructure
5.1.  There is no walkway for the Maze Hill Bridge comparable to the one at the Vanbrugh Hill bridge, notwithstanding the narrow pavements or the fact that
a) Maze Hill has been designated part of the Alternate Olympic Route Network, and b) LOCOG proposes that it forms part of the ‘Last Mile route’ between Maze Hill Station and the Olympic venue.
5.2.  For the safety of spectators using the proposed ‘Last Mile’ route (see Appendix) it seems very desirable to provide a pedestrian walkway on the Maze Hill Bridge. This would enable spectators to cross Maze Hill at a much safer location than currently proposed, to a much wider pavement capable of accommodating bunching of spectators and wheelchair users.
5.3.  Provision of a segregated walkway would also enable disabled and other spectators arriving at Platform 1 of Maze Hill Station to use the step-free incline on the southern side of the station, cross the railway using the segregated walkway rather than a narrow pavement on the road bridge itself, and cross the road to a wide pavement further from the blind bend in Maze Hill.
5.4.  There is currently no step free access for disabled and others spectators using Platform 2 on the northern side of the station comparable to the existing step free access from Platform 1 on the southern side of the station.  But the latest application for approval of the ‘Last Mile” route from the venue to Maze Hill station still makes no provision for disabled spectators, despite the commitment of Network Rail and South Eastern Trains, together with the Olympic Delivery Authority, to do so.
5.5.  There has been continuing delay in submitting proposals for the infrastructure required to enable the Royal Borough of Greenwich to honour its commitment to ensure convenient and safe access for disabled spectators to the venue, including from Maze Hill Station, as part of the planning process.  The delay is reducing the time available for consideration and approval of a safe ‘Last Mile’ route between the venue and the nearest rail station at Maze Hill.  The infrastructure this document proposes is shown diagrammatically below: 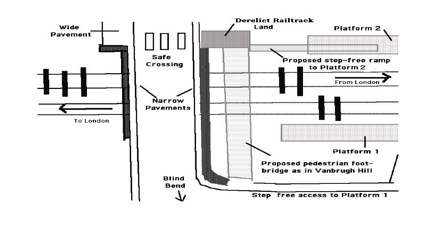 5.6.  When a bridge collapsed, putting the 2010 Commonwealth Games in Delhi in Jeopardy, the Indian army installed a replacement in four days flat at a far lower cost than the original.  It would be equally straightforward to install a gently sloping ramp to Platform 2 paralleling the existing gentle incline to Platform 1. This would provide access to disabled users, parents with pushchairs and others unable use the existing 51 Step footbridge between the platforms, as well as a safer ‘Last Mile’ route to the venue from either platform.

6.    Olympic Legacy
6.1.  The proposed new infrastructure would not only enable the Royal Borough of Greenwich to honour its commitment  to ensure convenient and safe access for disabled spectators to the 2012 Olympic and Paralympic Equestrian events,   but would provide a permanent Olympic legacy for visitors to the World Heritage Site and its Royal attractions (See Appendix).  Unlike the pedestrian  (stepped) bridges to be built across the A2 and Romney Road, and the inclined ramps to be installed over the Ha-Ha at the Queens House, which will  all be removed after the Games (at additional cost), there would be no expense required to remove these improvements, which could remain a permanent legacy of the Games.
6.2.  Greenwich Park was chosen because the Olympic and Paralympic Games greatly benefited from the use of such an iconic location (at considerable inconvenience to the local community).  It seems the least that the ODA could do is to upgrade the station infrastructure as a small gesture of thanks for this great privilege.  It would be at relatively low cost and would benefit  future generations of visitors to the World Heritage Site when it is restored to full public use.  It would also be a legacy for the local community and the Royal borough in this Jubilee year.

7.    Recommendation
7.1.  The Select Committee is requested to support the provision of a ramp from Platform 2 to the road, and walkway alongside the road bridge, at Maze Hill station to provide safe and convenient access for all visitors, including the disabled, as an Olympic legacy for the Maritime Greenwich World Heritage Site.