A Tree is lost 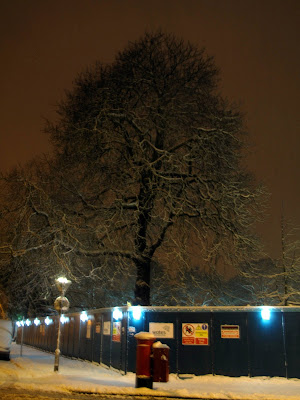 Sadly the battle to save this beautiful tree was lost on Monday and yesterday it was felled. At least those who passed earlier this week were able to admire it draped in snow for the last few days of its life.  Councillors questioned the Developers closely about why it had to be felled but it was clear that they had been put in an impossible position as the tree had not been properly protected at the initial planning stage.  The Westcombe Society Environment hope that lessons will be learnt for the future. 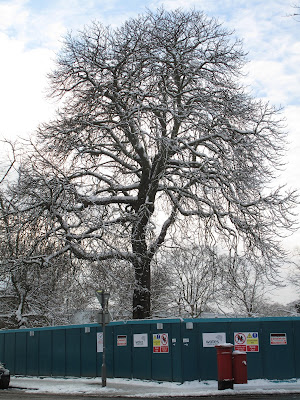 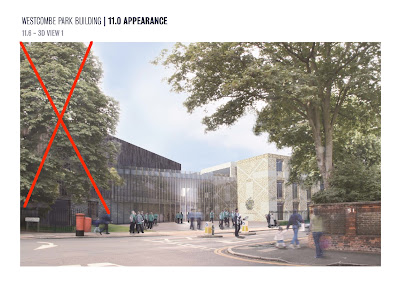 If you are concerned about the loss of this tree then read this article, make your own decision and make your views known to the Greenwich Area Planning Committee on Monday 21st January

When local residents were consulted about the new school building, they were shocked to discover that a Deodar Cedar, the most striking evergreen on the site, was to be felled. Pressure to preserve such trees was strong so a key condition of the Planning Consent for the replacement school was that the other trees were to be protected.  The Westcombe Society had understood that the developer was required to survey areas subject to excavation using the most appropriate method in order to precisely locate roots.  The Developer acknowledged in the original planning application that failure to do so would constitute ‘negligence’.

It now seems that roots of the Horse Chestnut were surveyed by hand digging after the old school had been demolished and while the foundations of the new building were already being dug. Understandably the application to fell the majestic flowering Horse Chestnut at the north-eastern corner of the site triggered a wave of protest.  The reason given for felling the tree is that the new sports hall requires foundations with excavation within a metre of the tree stem – well inside the 4 metre root protection zone. This would damage the roots and could destabilise the tree.  The developer’s own tree specialist had reported that the tree was healthy, showed vigorous growth, and had many years of life remaining.  The indication at the planning stage was that the tree would be protected and preserved; no mention was made that it might be at risk other than by the Blackheath Society who questioned building so close to such an important tree.  They were assured there would be no problem.  In December the Council issued a protection order for the tree, rejected the application and asked the developer to explore other design options for the sports hall that would preserve the tree in accordance with the planning consent.

However, a new application to fell the tree was immediately submitted with no further discussion of design options despite resident’s requests.  The developers claim that any redesign will delay completion of the school and that this will incur costs the school will be unable to bear.  Many feel that any costs should be borne by the developer.  The concern is that a replacement tree would take many decades to achieve the screening effect of the existing tree that is a key element of the agreed design.

Many residents have written to object to the application or signed a petition to preserve the tree. Nevertheless, Council officers have reluctantly recommended that the latest application to fell the tree be accepted. The application is now to be discussed by the Greenwich Area Planning Committee at 6.30pm in the Town Hall on Monday 21 January.

Many Greenwich taxpayers obviously resent having to pay to remedy what they see as a flawed design whether in monetary terms, delayed completion, or the loss of the tree.

At the request of the Westcombe Society our representative, accompanied by an Architect and a Landscape Architect attended a meeting with the Developer about the Horse Chestnut Tree.  The purpose of the meeting was to get answers to some of the questions being asked by residents concerned about the proposed felling of the Horse Chestnut.  The tree itself was not inspected at this meeting as visitors are not given access to the working site itself so discussions were based on drawings and photographs.

The foundations of the new sports hall and how they impinged on the Horse Chestnut were discussed.  The drawing and photographs below show the distance from the corner of the building to the tree and the position of the tree roots. 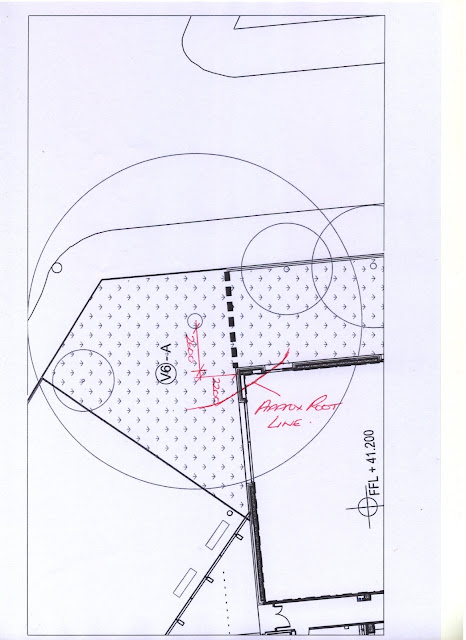 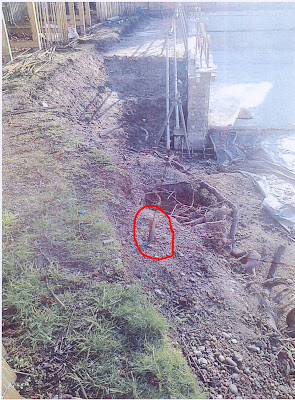 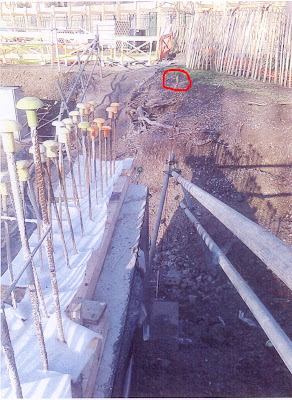 The peg circled in red marks the location of the corner of the building.    An extra 1 metre excavation is needed for working space.  There is some question as to whether these distances were made clear in the planning application but  assurances were given that neither the position of the building nor the tree have moved.  It was also pointed out that the foundations below ground level only extend 275mm beyond the line of the wall.  This is the small step that can be seen on the outer side of the wall in the photographs.  If the tree remains and the building is built in this position the excavated root will have to be cut.

With regard to the current application to fell the Horse Chestnut we are told that there has now been more than one opinion as the Council Tree Officer and a Tree Arbiter have also been on site.  Unfortunately the Westcombe Society have not been permitted access to view the tree itself with their appointed experts, though these experts wonder whether the amount of root that needs cutting is enough to pose a significant risk. Much of the root structure is probably under the road as roots usually follow the line of significant branches.

There was also discussion of replacement trees.  No final decision has yet been made but Town Planning are keen to maintain London Planes in the Area and would prefer a London Plane (usually regarded as a street tree).  Town Planning see a Sweet Chestnut as a Park Tree.  An oak would be much slower growing than the other options.  It was confirmed that the proposal is to plant a tree with a 50/60cm girth.  There is not enough room for two trees but any tree planted will be guaranteed by the developer for 5 years.  If the Horse Chestnut is felled there is significant concern that there may not be enough space for a new tree to grow.  There is existing drainage, a sewer outfall and a sink hole under the proposed forecourt of the new building and the roots of any new tree would need to be provided with space to spread around these.  the drainage will not allow another tree on the forecourt despite the feeling among some residents that there needs to be some sort of greenery to soften the forecourt especially the flank wall of the main teaching block.  If the Horse Chestnut is also lost then it will be many years before this corner of Westcombe Park Road even partially returns to the leafy state we have enjoyed for so many years. 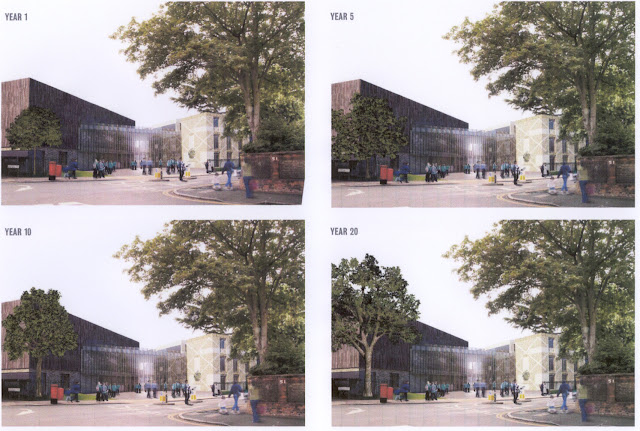 Various other points were also touched upon in the meeting as follows:

Generator:  The temporary generator which has been causing noise nuisance for a number of residents will be gone by the end of February

Brickwork:  The developers have built  a mock up of the brickwork which has just been completed.  They will arrange for other residents to be invited to view it in the very near future.  The bricks are not like those at Thomas Tallis (as some had feared) and we are told that the bonding is similar to that used on the older houses in the area.

22 COLERAINE ROAD, LONDON, SE3 7PQ  Ref 13/0113/TC
Fell one Norwegian Spruce, which is in poor health and contains lots of dead wood. It has grown to excessive height preventing the growth of anything below and causing excessive shade in the garden. We already have one Cedar of Lebanon of the same height next to it in the garden, which is not big enough to accommodate both
Case officer: Debi Rogers Telephone: 020 8921 5661
Registration date: 9 January 2013
Site Notice Date: 22 January 2013
Deadline for objections:  22 February 2013

Posted by wespes at 2:32 am No comments: