How was the Marathon Siege for you? 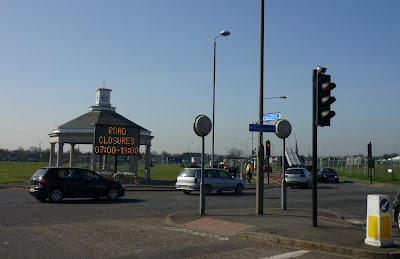 For more than 2 decades, residents of Westcombe Park have welcomed the London Marathon. Most were happy to cheer the runners on, though for some it was a (minor) inconvenience, with the area entirely cut off from the rest of the world for an hour or so. But the Vehicle Crossing Point at the Gibb memorial was invariably reopened as soon as it was safe to do so, once the marathon Rear Command vehicle had passed, and always by 10.30 or so, allowing residents to reach the rest of London and vice versa.

But in 2008, all that changed. Without any warning, the crossing point remained blocked for hours after it was safe to cross the Marathon route. All the roads from Westcombe Park Road to the stations were also blocked. None of this was announced in advance. As a result, families missed their holiday flights and ‘once in a lifetime’ events like christenings. Disabled people waited in vain for care assistants to get them up and feed them. Chaos (and the siege) reigned.

Following extensive negotiations between the Westcombe Society and the Council, new arrangements were introduced for the half marathon last September to provide at least one entrance/exit point to the Area. - see http://bit.ly/cB7gCM

This arrangement worked well and residents assumed it would be repeated for the full marathon. But the powers that be had other ideas. No information on the crossing point was circulated by the Council or the organisers, as used to happen. No ‘yellow notices’ were posted anywhere between Westcombe Park and the Clarendon Hotel (and beyond). The first warning residents had was the appearance of a flashing sign at the Gibb Memorial announcing that the roads would be closed for 12 hours until 7.00 pm.

Coming so soon after the Council’s approval of the Olympic Equestrian events in Greenwich Park, starting with a test event next summer, some residents wonder if the Council’s secrecy over the covert arrangements is an experiment connected with the Olympics.

I'm at a loss as to why Westcombe Park residents would assume that the same arrangements would apply to the London Marathon as the half-Marathon.

The access route used for the half-Marathon is just not available on Marathon day. Even if you could get access to Eastcombe Avenue, you'd catch the runners coming back along Woolwich Road. The real answer is to get the roads open again as quickly as they were in the past.

I won't argue about the pointless half-Marathon but the main Marathon is part of the history of the area and one of its joys. Is it really too much to live with for one morning, notified well in advance?

it's so rotten, closing all our roads like this. we pay road tax and should be able to use the roads! at the very least there should be at least one entry/exit point so that we aren't trapped like this. absolutely disgusting.

I have to agree with N. It is only one day a year and should not be beyond the wit of anyone vaguely aware of what is going on around them to cope with this. If you have a vital appointment then park outside the area in advance and walk to the car, use public transport, go and stay with friends... etc., there are always alternatives.

There is, however, no alternative in terms of a way out for private vehicles. Westcombe Park is land-locked in this kind of scenario, end of story.

Emergency services will always be able to gain access no matter what.

half the time you don't even know when you're going to be blocked in, you just wake up one day and get int he car only to find out that all the roads are closed and half of london is running past your front door. not everybody religiously follows the dates of the marathon each year, and i for one have never received any advance notification of the event. and it's not just the marathon, but all the other similar events like the sony ericsson half marathon too. you just wake up one day and find out that you're blocked in and can't go anywhere. it is absolutely disgusting. how hard can it be just to have ONE single little route of passage so that we're at least not blocked in all weekend. it's a bit like nazi germany, all you want to do is go somewhere yet a mob of officials stop you in your tracks and tell you that you're sadly 'confined' to a certain area and if you don't like it then tough. somebody really should do something about all this. i like big public events as much as anyone, but saying that it's just one day a year doesn't wash. that's like saying i can punch you in the face but you shouldn't complain because i'll only be doing it one day a year. not only that, but what exactly do we all pay road tax for again???? yes, to use the ROADS. not to be told that we can't use them.

You will see from the latest post that the Westcombe Society will continue to press for better and more timely information. Keep reading the Blog and Westcombe News for information about road (and Tunnel) closures.