Pub in the Park Cancelled 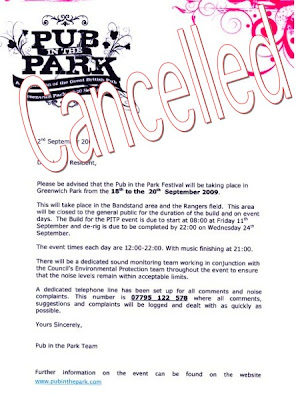 The planned 'Pub in the Park' event, which required the closure of the Bandstand and Ranger's Fields for nearly two weeks, has been cancelled because of lack of support. Although it claimed to be targeted at families, entry tickets were priced at £20 each. Refund arrangements can be found at http://www.pubinthepark.com/
When initial consultations were started in February, the Westcombe Society was impressed by the care that seemed to be going into the proposals and the extent to which the organisers seemed to be willing to respond to local concerns.
Sadly, things then seemed to unravel. Instead of consulting local residents four roads deep around the Park as required for events in the Park, even houses overlooking Bandstand field were not consulted. The procedures for the official advertising of the application for a licence were also defective. And the proposals - including a large sound stage facing Westcombe Park, with loud music until 23.00 for three consecutive nights - were very different from what had been originally promised. As a result, the application faced a number of objections from the Council's noise nuisance team, the Royal Park, the Westcombe and Blackheath Societies and others.
Changes were made to the application to go some way to meeting these concerns and objectors were handed a 200+ page document setting out the revised proposals at the beginning of the licensing hearing and the amended licence was granted, allowing noise levels considerably louder than the Glastonbury Festival but ending at 21.30.
However, it seems that the demand for tickets was insufficient. So the Park will remain open for normal use for the last days of summer.
Posted by Vanbrugh at 11:30 am